The Baby Jumping is the popular name by which the Spanish festival of “El Colacho” is internationally known. It is held in Castrillo de Murcia, Burgos province, as part of the Corpus Christi celebrations (from Wednesday before Corpus until the following Monday). The odd procession will take place on June 14, 2020.

The Colacho, a man dressed in a yellow, red and green suit symbolises the Devil. He holds an oversized castanet and a whip made of horse´s or cow´s tail.

The main events of these Corpus Festivities are the Runs of the Colacho and the Baby Jumping.

During these days, the Colacho appears accompanied by the “Atabalero” (drummer) and some members of the brotherhood of Santísimo Sacramento de Minerva, who lead and organise the festival. They parade through the streets of the village, whilst the Colacho chases and whips with his tail anyone who insults or makes fun of him.

An unsusual religious procession  is held on the Sunday evening.  The Colacho (as the devil) jumps over babies who lie on mattresses transversely placed  on the procession route. The “Colacho” from the previous year is also wearing the costume, assisting his successor. After the jumping, babies are blessed and sprinkled with petals.

Once the Baby Jumping has been completed, everyone goes around the wine cellars. The party continues with folklore and typical products such as cheese and wine.

Move the mouse over the picture below to see the album 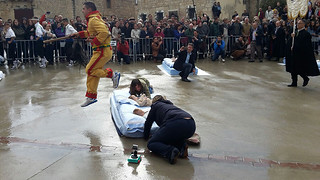 This ritual dates back to 1620.  It was believed that the devil jumping over the babies prevented illnesses as well as guarded them against evil spirits.  Therefore, babies born in the village in the previous twelve months, were placed on the mattresses. Nowadays, most babies are actually coming from outside town, with the parents’ sole purpose of keeping the tradition alive.

The tradition of the dancers of Castrillo is not clear.  For sure they are part of the festival since 1979.  However, some people say that they dissapeared for nearly two centuries.

It is said that Pope Benedict was against this tradition, mainly with regards to the relation of the devil´s jumping -and by doing so cleansing the babies of original sin- with the Catholicism Baptism.

But the ex-pope is not the only one against this festival. In fact, as result of the criticisms received from many fronts,  which consider these jumps to be very dangerous, the brotherhood of Santísimo has decided to change the position of the mattresses (width wise), with just one row of babies. Consequently, the jumps are now not so  impressive.

The curious thing is that there is no report of injuries to the babies over these four centuries. Or at least, that is what everyone says.

On Sunday, after midday mass, in the town square everyone can enjoy local wine and the typical sweet pastry of the village, “Orejuelas“. They are worth trying.