The Festival of Carthaginians and Romans is held in the city of Cartagena, located on the Spanish southeastern coast.

In the second fortnight of September, important events that happened more than 2000 years ago are re-enacted.

‘Cartagineses y Romanos’ has been declared a Fiesta of International Tourist Interest.

Around 550 BC Carthaginians (seafaring traders) came to the Iberian peninsula. However, it was not until the 3rd century BC that the area today called Cartagena was occupied by the Carthaginians, turning into Qart Hadasht. It happened at the time of the first Punic War,  while Romans and Carthaginians were fighting to take control of the Mediterranean trading routes.

But the scenes played in this festival take us back to the second Punic War (218-201BC), when Romans, led by Cornelius Scipio, invaded and conquered Qart Hadasht while Hannibal took his troops to attack Rome.

How the Carthaginians and Romans Festival is celebrated

Every day during the festival several historical events are enacted

Some of the events are the wedding of Hannibal and Himilce, the Roman circus, the marching of all the troops and legions; and one of the most remarkable, the Great Battle to conquer Qart-Hadast (at the ‘Cuesta del Batel’).

The Festival Camp is the place in which all the associations (around 50 groups embodying Romans and Carthaginians) have their headquarters, recreated as in their times, with bars open to all visitors. A lot of events and parties are held there.

I was amazed by the number of people involved in the festival, wearing warrior uniforms and dressed like Romans, Carthaginians, Phoenicians… And even more when seeing them in the Roman Theatre, built between 5 and 1 BC.

Although at the time I arrived  in Cartagena, it was difficult to join a group to take part in the festival, I met the ‘Amazonas de Capadocia‘ legion,  and I had the opportunity to share with them the three days I had to get to know the Carthaginians and Romans Festival, partying and even fighting in the battle. 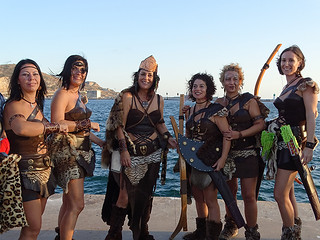