“Curro de Candaoso” or ‘Rapa Das Bestas’ of San Andrés de Boimente takes place on the first Sunday in July.  During the early hours and after the traditional breakfast of garlic soup, the horsemen round up the semi-feral horses living on the mountain and lead them to the ‘curro’ (corral), where the spectacle begins around eleven am. The ‘aloitadores’ cut the manes and tales of the “bestas” and, they wrestle the foals to mark them in the traditional way -with a hot iron.  Undoubtedly, the most impressive moments in the ‘curro’ of Candaoso occur when ‘garañones’ (male horses) are enclosed together. They usually struggle with each other; however, as soon as it looks like the fight is starting to become serious they get separated.

The performance inside the curro is followed by a mass, folk music and horse and donkey races, ending up with a typical Spanish ‘verbena’ (evening party with live music); all on the hills.

A little bit of history about the ‘curro de Candaoso’

This ‘curro de Candaoso’ has been held since 1969 and it has been declared of touristic interest.

Despite being only a few kilometres from the city of Viveiro, its location at the mountain of Buio helps prevent it from being too crowded.

From the hill the views to the ría de Viveiro (inlet) and Estaca de Bares are amazing.

This is the second “curro” I have visited and I cannot help making comparisons.  Although the basic aim is to preserve the tradition of the “rapa das bestas” and of course, to attract tourist to the area, there are differences in the techniques used. Whilst in A Rapa Das Bestas of Sabucedo the “aloitadores” get on the horses from the ground, in the ‘curro de Candaoso’ they jump onto the animals from fences, with hardly any space to move, which makes it looks much easier. However, the  “spectacle” between ‘garañones’ here is guaranteed. 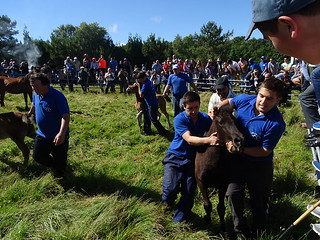