The Festival known as Descent of the Cinca River features the Nabatas, traditional wood barges used since the XVI century to the middle of the twentieth Century to transport wood down the river.  This was the only means of subsitence for the people living in this region of the Pyrenees. Due to the erection of dams and transport development, this means of transport is not used any longer. Three decades ago the inhabitants of this region decided to get  back this tradition. They work over several months to make this nabatas as in the past. On the third Sunday of May (17th May 2020) this wood barges descent the Cinca river from Laspuña to Aínsa.

Different activities take place during this weekend in Laspuña, where the festivity is held.

Drag the mouse over the picture below to see the album 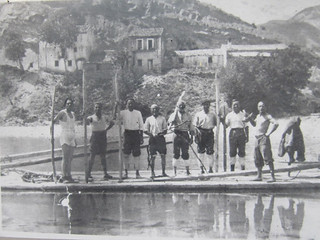 Only people from the region know about this original festival, therefore it can be a very interesting trip for a weekend to know this beautiful area and to get an insight into this tradition.