A mock military coup takes place in Ibi, Valencia region.
“Els Enfarinats”, in mock military dress and with their faces painted with colours, take over the streets. Armed with flour, eggs and firecrackers battle against the Opposition.

This festival is also known as “New Justice” and it is held on December 28, Day of the Innocents. The tradition is over 200 years old. Although its origin is unclear, it has similarities with the Carnival and with the Roman Saturnalias.

HOW IT IS CELEBRATED

The night before the Day of the Innocents, the ‘Enmantats’ (men dressed in blankets) parade through the streets of Ibi performing parodies of local events which have occurred during the year and letting people know the laws which will govern the following day, when they become ‘Els Enfarinats’.

The morning of 28th December the ‘Els Enfarinats’ race to snatch the Mayor´s ceremonial mace (made especially for the occasion) . From that moment the ‘Enfarinats’ have the power over the city. They impose ridiculous laws on the citizens and everybody has to comply with them to avoid being fined or taken to jail.

There are people who don´t agree with their stupid laws and want to restore order. That is why a battle will take place in the church square. But this is a very unusual battle where both sides will pelt each other with flour and eggs, and let off firecrackers and fire extinguishers filled with flour. Hundreds of eggs and hundreds of kilos of flour are thrown in this annual battle.

After the battle, both sides join together and raise funds for local charity. Shops, banks, even passers-by are willing to support them. 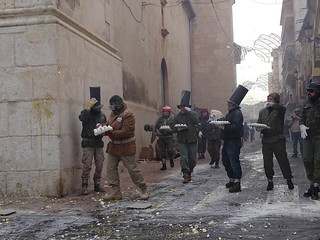 At 5 pm the community gathers together for another event: the ‘Dançá’. This is a traditional dance which can only be danced with the ‘Els Enfarinats’ Mayor´s permission. Once he consents to the Dançá, the authority of ‘Els Enfarinats’ comes to an end. Anyway, they will still have to select the winners among the ‘tapats’ (people in disguise and with their faces hidden).

This festival day will bid farewell with the Dance of the Viceroy, after dinner.

Some Curiosities about the ‘Els Enfarinats’

The ‘Els Enfarinats’ comprise around twenty close friends and relatives, so it is not easy to join them. On the other hand, anyone who wants to fight against the ‘Enfarinats’ can be in the Opposition. Even if nowadays they are trying to get organised as a team by all wearing the same black top hats among other things.

The money raised is annually given to the old people´s home of Ibi. This year the ‘enfarinats´alone raised the amount of 1000 Eur.

This is a very funny festival even if you only want to be a mere spectator. However, I would encourage you to take part in the battle. The firecrackers are not allowed during the first hour, so, if you are scared by them, you could give up when they make their appearance. If you want to stay, then be prepared for some scares, but nothing too serious.

I was amazed by Ibi’s folklore variety and much more by the fact that all the people there could dance those ballroom dances. Unfortunately this year it was not possible to admire the local costumes of the Dançá.

Somebody told me that in recent years, the issue of the destination of the raise funds has drawn into debates: Instead of being donated to an organization which currently is not free of charge, it should be used for another charity purposes. In my opinion, there are some occasions when even traditions should adjust to changes. Do you agree with me?