The Near Death Experiences festival, officially named “Romería de Santa Marta de Ribarteme”, is a celebration held every July 29th in San Xosé de Ribarteme, As Neves, in the province of Pontevedra.

The highlight of this romeria it is the fact that some people participate in it in coffins, being carried by family and friends.  This is how local people show gratitude towards Saint Martha – patron saint of resurrection, after surviving a close brush with death or asking for a cure from a serious illness.

How the Romeria of Near Death Experiences is celebrated

Lead by the effigy of Santa Marta, this unconventional procession will start after the penultimate mass of the day, which begins at noon time. The “offered penitents”, as the participants inside the coffins are called, are paraded following the virgin, surrounded by a lot of people. Some of them march barefoot, due to promises or votes. The parishioners chant ‘Virgin Santa Marta, star of the north, we bring you those who saw death’ in a melancholic way.

Throughout the whole day, the devote believers visit the Virgin to give her an offering, usually a monetary donation. The rest of day is spent celebrating life with friends, eating the typical ‘Pulpo a Feira’ (octopus), drinking Albariño (Galician wine), and enjoying the typical Spanish ‘verbena’ with music and dancing. Besides, there is a traditional auction where animals (such as cocks or lambs) are sold.  It is not uncommon for the money that is raised in the auction to be offered to the Virgin as well.

Origin of this festival

It is believed that the Romeria of “Near Death Experiences” is a tradition of more than five centuries, although the first historical reference dates back to 1700, where pilgrims were asked for donations to repair the church of the village.

Since then, thousands of pilgrims gather together around San Xosé de Ribarteme to celebrate this day. 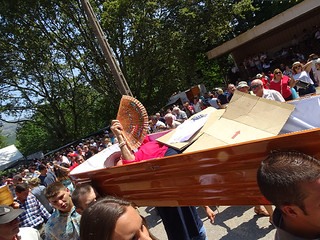 There were six offered penitents this year, four adults, a young person who got burnt in a road accident several years ago and a baby whose coffin was empty, as it is usually done in such cases.

This may be the only procession in which living people are carried in coffins, but after seeing so many pictures, it hardly surprised me.  What really drew my attention was the disrespect shown by some photographers towards the offered penitents and their families.

The best thing that day was the atmosphere around the village, the local people I met, with whom I had a great meal – including ‘pulpo’, and the ‘verbena’ in the evening, when most foreigners and photographers were gone.