‘Sanfermines’ is, probably, the most crowded and wellknown festival of Spain. Iit is not only the eight exciting runnings which take place at 08:00 am every morning, but also the party atmosphere in every corner of the city that attract thousands of visitors. Of course was declared of International Tourist Interest.

The Sanfermines running of the bulls is a celebration of medieval origin, when the fighting bulls were brought from the countryside to the main square by the herdsmen helped along the way by the shouts of the villagers and their sticks.  It was not until the end of the 19th Century, that the villagers started to run in front of the bulls.

Move your mouse over the photo below to see the photo album. 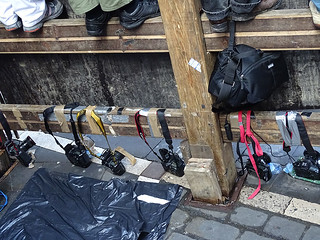 If you want to enjoy Sanfermines, you should go during the week time, it will be not so crowded and it will be easier to find a place to stay. Anyway, book early in advance.