The Wine Battle takes place in Los Riscos de Bilibio, where the  Hermitage of San Felices is located. On the 29th of June, thousand of people meet together to take part in this international WINE BATTLE, where all kinds of recipients are used for hurling wine at the opponents. A lesser-known battle takes place two days earlier.  It is the Wine Battle for children. Here only grape-juice is used.

A bit of History about the Wine Battle

With the construction of the Hermitage in the XVIII century, the pilgrimages and the processions in honour of Saint Felices started to be more organized. There was already at that time a mass  celebrated every 29th of June, being followed by an outdoor meal with food and drink, where jokes and port wine stains on the pilgrims’ cloth became a feature of this meal. This seems to be the origin of this festivity, which can still be enjoyed each year on the same day. 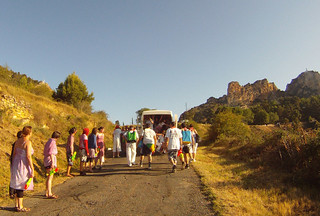 Tips for this festival:

Dress in white, tie a red scarf around your neck and launch yourself into the battle.

In case you are more sensitive than others to cold weather, wear a raincoat under your white clothes or wrap yourself in film. That is how locals fight off the cold.